Deprecated: Assigning the return value of new by reference is deprecated in /home/content/13/9775713/html/wp-content/plugins/audio-player/audio-player.php on line 903

All chalk as expected to launch the first year of a new format. For the first time, the league featured multiple “play-in” games to the quarter finals. 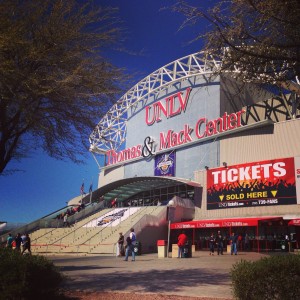 Despite the expected results, we were treated to some nice moments, including consecutive great comebacks (or incredible meltdowns) depending on your perspective.

In game 1, Utah State took control early over Colorado State, then CSU took control for much of the game from mid first half until almost the end.  The Aggies stormed back to erase a 9 point deficit with 90 seconds to go. It was Boise State-like collapse by CSU, which included multiple turnovers, USU timely threes and, worst of all, a horrendous technical by Daniel Bejarano.

For the Aggies they enter Thursday’s matchup with No. 1 seed (and 8th ranked) San Diego State with the best chance at a true upset (6 seed Boise should be favored over 3 Nevada). Utah State pushed SDSU to the brink in Logan and will come in “hot” (having just won a thriller), desperate and capable of knocking down threes. The Aztecs are safely dancing and with a high seed – it wouldn’t be shocking to see them maybe overlook USU a bit. To be clear I am not calling for an upset – I just think this is the likeliest one to occur.

For CSU (16-17), a brutal ending caps a difficult transition year. A returning core of players and promising newcomers should allow the Rams to contend for the NCAA tournament next season.

In game 2, Fresno State came out dead flat. The Bulldogs struggled to finish at the rim, guard the Falcon’s cuts or execute offensively (vs zone or man) for much of the game. Guerrero’s foul trouble in the second half keyed a huge 16-0 run by the Falcons that seemed to put the game out of reach with 10 minutes to go.

Down 56-41, Fresno started turning over Air Force with their press, and the Falcons (who hadn’t led anyone by much of a margin in months) lost their poise when the lead began to shrink. They turned it over for layups, missed numerous critical free throws and Tyler Johnson made back to back threes. Air Force scored just 4 points in the last ten minutes. Ballgame.

For Air Force – I really like Tre Coggins (how does the Academy get talents like him and Lyons in recent years?) and they should be much improved next season. For Fresno, they looked very shaky in this one, and shouldn’t pose much of a threat to No. 2 New Mexico on Thursday.

In Game 3, it was Boise State 25, San Jose State 0 about 8 minutes into the game. Essentially, Boise got a glorified practice while the Spartans got a trip to Vegas. I like Dave Wojcik but he is two years away from even being competitive in the MWC. He’s decided to build a program instead of patching something together with JUCOs and transfers – and this is what that looks like.