After the last media timeout of the game, I couldn’t help but notice the scores of fans that got up from their seats with the Rebels down by 11 and headed for exit signs.

I wasn’t the only one that noticed. Khem Birch looked around the stadium, so did Christian Wood, and KO.

For the rest of us that stayed in our seats, we got to enjoy one of the more memorable finishes at the Mack in recent memories.

The first half was a mess. I honestly couldn’t tell you what the singular problem was, but it was on both sides of the ball which leads me to believe it was more of an effort problem.

Early in the first half, UNLV caught a break when Jeff Elloriaga got injured on a drive. I’m glad the injury isn’t serious, but he had it coming to him. He was out of control on the drive which should have been called a charge, and then he came down hard on his hip.

The Broncos shot a blistering 53% from the field in the first half. Defensively UNLV couldn’t find any answers for Derrick Marks.

As is common with UNLV, our offense begins with our defense, and we are at our best when we are forcing turnovers, and forcing bad shots. We couldn’t do either and limped int0 halftime down 36-26.

The first 10 minutes of the second half was more of the same except we were finding some answers offensively and getting to the charity stripe which kept us in it.

After the last media timeout, when it seemed like All Was Lost (Robert Redford) UNLV went beast mode (Marshawn Lynch).

Khem Birch went 4/4 from FT line and got UNLV within 7. Two defensives stops, and KO 3 pointer, and a FT later, it was 3 point game.

In a ten second sequence, BSU saw there 3 point lead evaporate after a layup, steal, layup by Deville Smith. 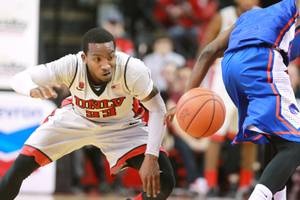 Mikey Thompson had an answer to put Boise State back up by 1 with 38 seconds left.

During a 30 second timeout, Dave Rice drew up a play for Deville Smith to drive to the basket, and kickout to KO.

Splash. That shot put UNLV up for good. Derrick Marks missed a game tying attempt, and BDJ converted two FTs to put the game out of reach (and cover the spread).

-Carlos Lopez- Sosa had  some terrific minutes last night. His effort kept the team from folding and letting the game get out of reach. 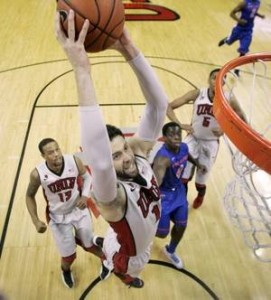 -Deville Smith has taken the reins of this team. We go as he go.
-Khem Birch continues to wreak havoc to opposing offenses. 6 more blocks. If he doesn’t win MWC defensive player of the year, I’ll be launching a formal investigation.
-Boise State forward, Nick Duncan looked like he had spent a good amount of time at Dunkin Donuts. Ya dig?
-Mikey Thompson is looking for his wallet, if you see Deville Smith, could have him give it back. Picked his pocket.
-Hey Anthony Drmic, a 2006 emo band, they want their haircut back.