Remember how against Utah State, our perimeter defense was really good. Utah State is the best 3-point shooting team in the MWC, and we locked them down to just 2/17 from beyond the arc?

The Fresno State game was a lot different.

UNLV was able to stave off a feisty Fresno State team to walk away with a 75-73 OT win.

The bulldogs got off to hot start from deep and went into halftime with a 6 point lead.

UNLV played more assertively in the second half, and were able to takeover, but those dang Bulldogs just wouldn’t go away. Sometime after Alex Davis’  tenth offensive rebound, the game went into OT.

Now I love Bryce Dejean Jones, but he wasn’t on his game tonight. I blame it on the staples in his head. 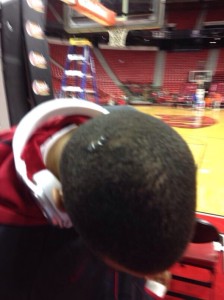 He couldn’t get anything going all night. After a 3 point attempt that failed to even hit rim on a wide-open 3, I think just about everyone had given up on him.

Down 72-70, Bryce knocked down a deep 3 to give UNLV the lead for good, and just like that, he became the hero.

With a 74-72 lead, Khem Kong  swatted a Cesar Guerrero layup attempt to seal the game. 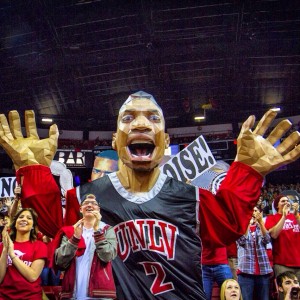 UNLV picked up the sweep against Fresno State this year and moved to 13-7 (4-3).

-Deville Smith is half man, half animal. A manimal.
-Khem Birch showed no mercy. He finished the game with 19 points, 11 rebounds, and 4 blocks.
-UNLV only committed  6 turnovers in 45 minutes of basketball.
-Tyler Johnson tried to take the title of worst/best dunk title away from Adam Waddell, but nothing will ever beat this: